How to reduce the number of people misusing the [elisp] tag?

I've noticed that @Drew, especially, ends up spending a lot of time removing the elisp tag from questions, and pointing out its definition to users.

I don't feel that there's any other tag which gets incorrectly used with such frequency, and it strikes me that all the editing is quite the waste of time, if the issue could be reduced somehow.

Because it happens so often, I would be in favour of adding some UI text (to whatever extent is possible), to firmly dissuade users from using this tag casually.

The tag description is:

Yet the "*DO NOT USE IT*" notice appears too late for it to be visible to anyone asking a question -- the amount of text shown in the editing UI doesn't get much past "for questions about Emacs Lisp as a language, compared to other languages" -- which is doubtless enough for some users, but not as clear as I now think it needs to be.

*ONLY* for questions about Emacs Lisp as a language ...

Secondly, the form field for entering tags has a placeholder attribute, such that the initial empty field says:

(Side note: I'm not sure why there are parentheses in that text. That seems wrong?)

And perhaps there's other places where we have control over the text, which might be used to further highlight the issue?

I realise this is making a special case of this one tag, but I feel that it needs it.

I don't expect these changes to entirely stop it from happening, but it might help it to happen less often, to some helpful degree?

I've added the "ONLY" part to the front end of the tag as requested. I believe everything else (updating the placeholder, adding a tag warnings) requires intervention by a SE employee.

There's a little known feature called tag warnings which could be used for this. Some sites in the network have them enabled for a few tags; they have to be added by one of the Community Managers. They are more 'in your face' than the tag excerpt which is easily ignored. 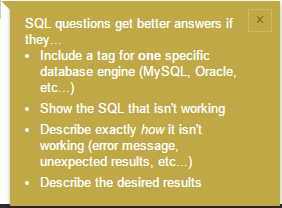 Not the answer you're looking for? Browse other questions tagged .

15
When should the tag 'elisp be used?
0
Revise wording of elisp tag description

3
Are the tags [editing] and [text-editing] useful?
4
Should tags be named after the item or the corresponding emacs mode related to the item?
5
Emacs-as-OS versus Emacs-as-IDE?
0
Revise wording of elisp tag description
15
When should the tag 'elisp be used?
3
How hard should we enforce elisp coding conventions in posts on this site?
2
What tag should one use to get a question answered with elisp code?